EU Civil Protection Mechanism: from the assistance to the resilience

Requests for Assistance in 2021

Last January 2022, the Directorate-General for European Civil Protection and Humanitarian Aid Operations (DG ECHO) published a Daily Map that shows all the Requests for Assistance in 2021 (in the frame of the EU Civil Protection Mechanism) in the world.

The Emergency Response Coordination Centre (ERCC) is the DG ECHO’s operator that “sets up to support a coordinated and quicker response to disasters both inside and outside Europe using resources from 34 countries participating in the Union Civil Protection Mechanism”. 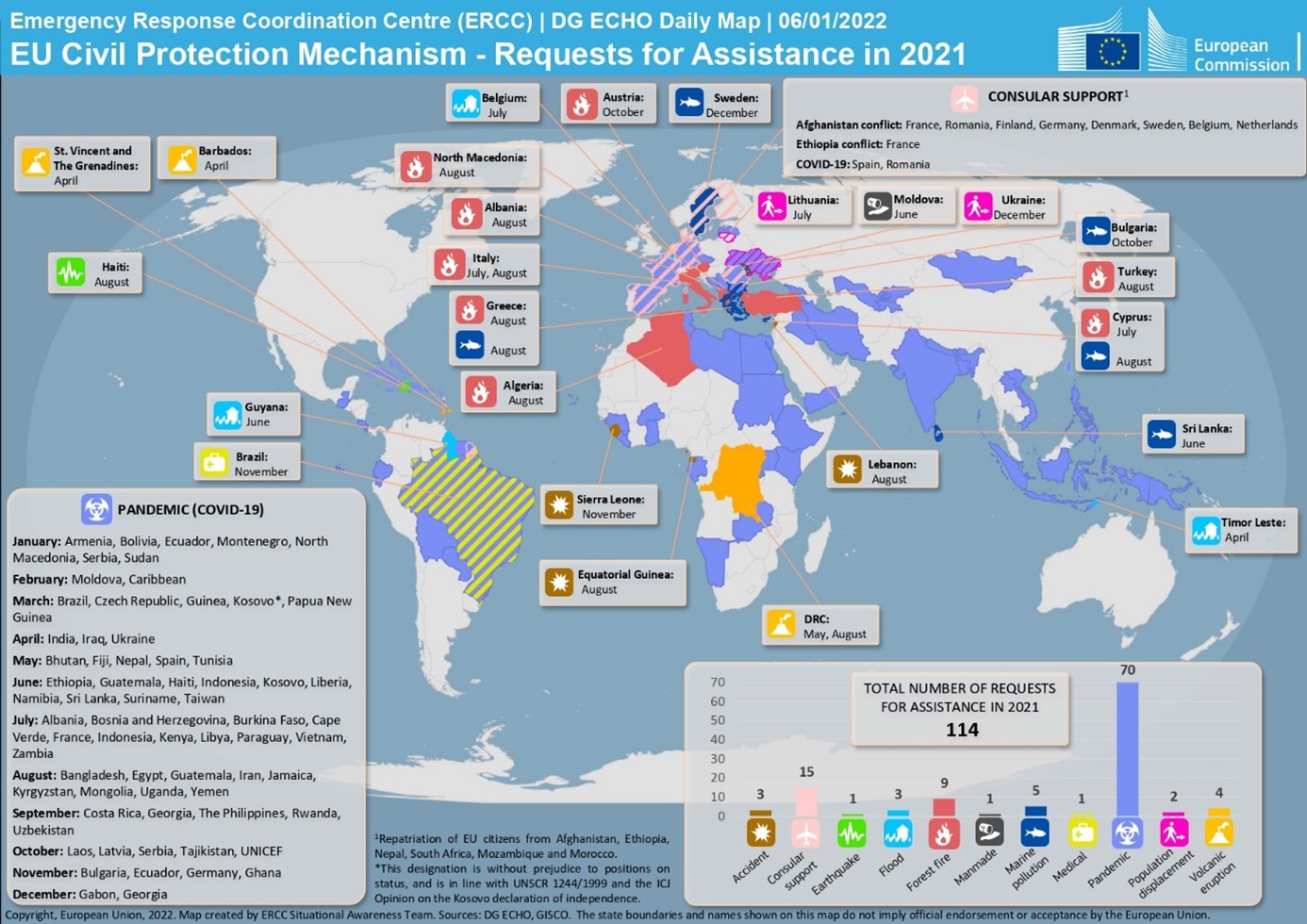 Last February 5 in Madagascar, the cyclone Batsirai caused torrential rainfall, strong winds, landslides and storm surges to the central-eastern coast areas of the island that led to 10 deaths and affected up to 250,000 inhabitants. A lot of people were evacuated from their homes due to flash floods, and damage to infrastructure and crops.

“The EU is acting fast to ensure the timely arrival of EU humanitarian staff and essential technical assistance following cyclone Batsirai which has caused deplorable loss of lives and hardship to the people of Madagascar. I am very thankful to all the EU Member States that have offered their support. Our thoughts are with all those affected and with the brave first responders on the scene who are risking their lives to reach those in need. We stand ready to provide further assistance”, said Commissioner for Crisis Management Janez Lenarčič.

Actually, the European Commission plays a key role in coordinating the disaster response worldwide, contributing to at least 75% of the transport and/or operational costs of deployments. When an emergency overwhelms the response capabilities of a country, it can request assistance through the EU Civil Protection Mechanism.

Increased awareness of risks by society, together with readiness and the ability to apply optimal procedures during an emergency, would undoubtedly make populations more resilient. CORE precisely aims at measuring, controlling and mitigating risks induced by natural and man-made disasters.

One of the CORE Case studies is the Aude Region flash flooding in October 1-15, 2018, in France: On 23 September 2018, Hurricane Leslie formed and moved eastwards across the Atlantic, making landfall in Portugal on 13 October and then moving towards France. The remnants of the large and erratic tropical cyclone fed a quasi-stationary cold front over southwestern France, generating severe thunderstorms and leading to flash flooding during the night of 14-15 October in the Aude region. Rivers and streams broke their banks, flooding the small, narrow streets of the town of Villegailhenc with muddy water engulfing houses, sweeping away cars and killing 14 people. Emergency services arrival was hampered by inaccessible roads and the collapse of a bridge.