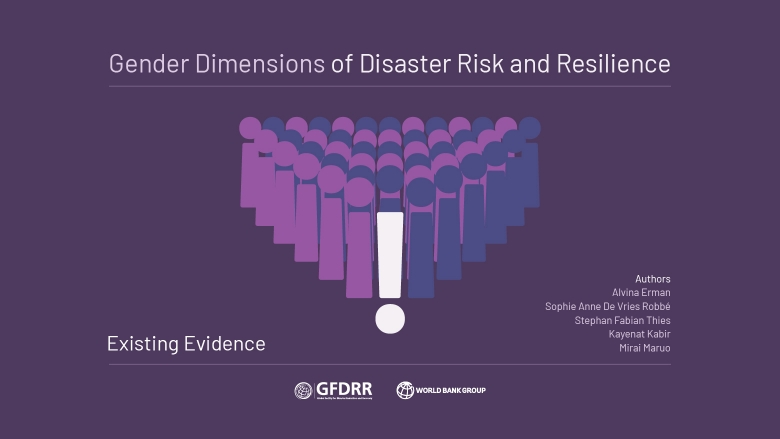 Disaster Risk and Resilience in the light of gender inequalities

Women are not vulnerable in itself and hurricanes, megafires or floods are not misogynistic: a foregone conclusion that should not make us forgetting that we are not all affected equally by natural or man-made disasters. Understanding how gender inequalities drive disaster impacts, and vice versa, is the only way to implement effective policies for building a strong and inclusive resilience.

"Men and women, boys and girls have different experiences of disasters. Gender dynamics impact both the way they are affected by disasters and their capacity to withstand and recover from them. Gender inequalities can result in gender-differentiated disaster impact, and differentiated impacts can influence gender dynamics, which in turn affect future resilience to shocks. Disaster risk management policies are designed to maximize results, taking local conditions - including gender dynamics - as fixed. When women and men are affected differently by disasters, practitioners and policy makers have a responsibility to use the tools available for mitigating disaster impacts to close gender gaps in outcome. An improved understanding of the gender dynamics of disaster risk and resilience also allows for better policy and program design, which benefits all stakeholders", say the authors of the Report Gender Dimensions of Disaster Risk and Resilience – Existing Evidence published by The World Bank - The Global Facility for Disaster Risk Reduction and Recovery (GFDRR).

When a calamity occurs, disasters impacts and gender inequalities are partially overlaid on each other and drive each other, producing the gender-differentiated impacts of disasters that affect so negatively the women regarding their exposure, vulnerability, prepareness and coping capacity, not forgetting that such gender-differentiated impacts can worsen their resilience to future disasters!

And for good reason, twenty years later, the three takeaways highlighted by Eric Neumayer and Thomas Plümper in their article The Gendered Nature of Natural Disasters: The Impact of Catastrophic Events on the Gender Gap in Life Expectancy, 1981–2002, including that (i) natural disasters kill more women than men or kill women at an earlier age than men, (ii) the stronger the disaster, the more severe impacts on female life expectancy, (iii) higher women's socioeconomic status, the weaker is this effect on the gender gap in life expectancy, are still topical and show how "the socially constructed gender-specific vulnerability of females built into everyday socioeconomic patterns [leads] to the relatively higher female disaster mortality rates compared to men".

To address the problem, the World Bank Report, besides stating that "a good disaster risk management should consider ways in which gender dynamics influence disaster impacts in any given area before making decisions on policy or project design", outlines important strategic and operational priorities to mitigate gender-differentiated impacts of disasters:

Finally, some main messages from the World Bank Report deserve to be mentioned:

As stating previously, the gender-differentiated impacts can worsen resilience to future disasters, and even the long-term building resilience.

"This paper draws out the gendered factors that affected their resilience, and in so doing, begins to address the dearth of research related to gendered aspects of long-term disaster resilience. It is unique in capturing the voices of survivors who spoke of events 9 years after the 2009 Black Saturday fires and of earlier fires and floods in Victoria more than 50 years ago, including the 1983 Ash Wednesday fires. Over decades, gendered expectations of men and women significantly hindered resilience. Men spoke of the long-term cost to them of demands to ‘be strong’ in the worst of disasters and reasons they were reluctant to seek help afterwards. Women spoke of their contributions holding a lesser value and of discrimination. Discussions of violence against women and children after disaster, and suicide ideation in anticipation of future disasters offered critical insights. Protective factors identified by informants were not wholly intrinsic to their character but were also physical, such as essential resources provided in the immediate aftermath, and psychological and community support offered in the long-term. Factors that helped resilience departed from the ‘masculine’ model of coping post-disaster by moving away from a refusal to admit trauma and suffering, to community-wide resilience bolstered by widespread emotional, social and psychological support. Genuine community planning for disasters before they strike builds trust and offers insights for emergency management planners."

Regarding men experiences, the research highlights some important insights, including the two following ones:

Concerning the women, here below are some findings outlined by the research:

"It is clear from the accounts for participants in this research that stereotypes of masculinity and femininity in response to disaster remain persistent, defying progress in gender equality. Men are understood as protectors and women as nurturers. Men are frequently unable to admit to experiencing trauma or a sense of failure. They are reluctant to seek help, instead suffering alone, while the responsibility for holding families together is accepted by (or imposed on) women.
Moving away from this outdated model, factors identified by informants as helping resilience related to effective emotional, social and psychological support in a community-wide setting. This has the potential to reduce the stigma felt by men in seeking help and to reduce the imperative of caring felt by women".