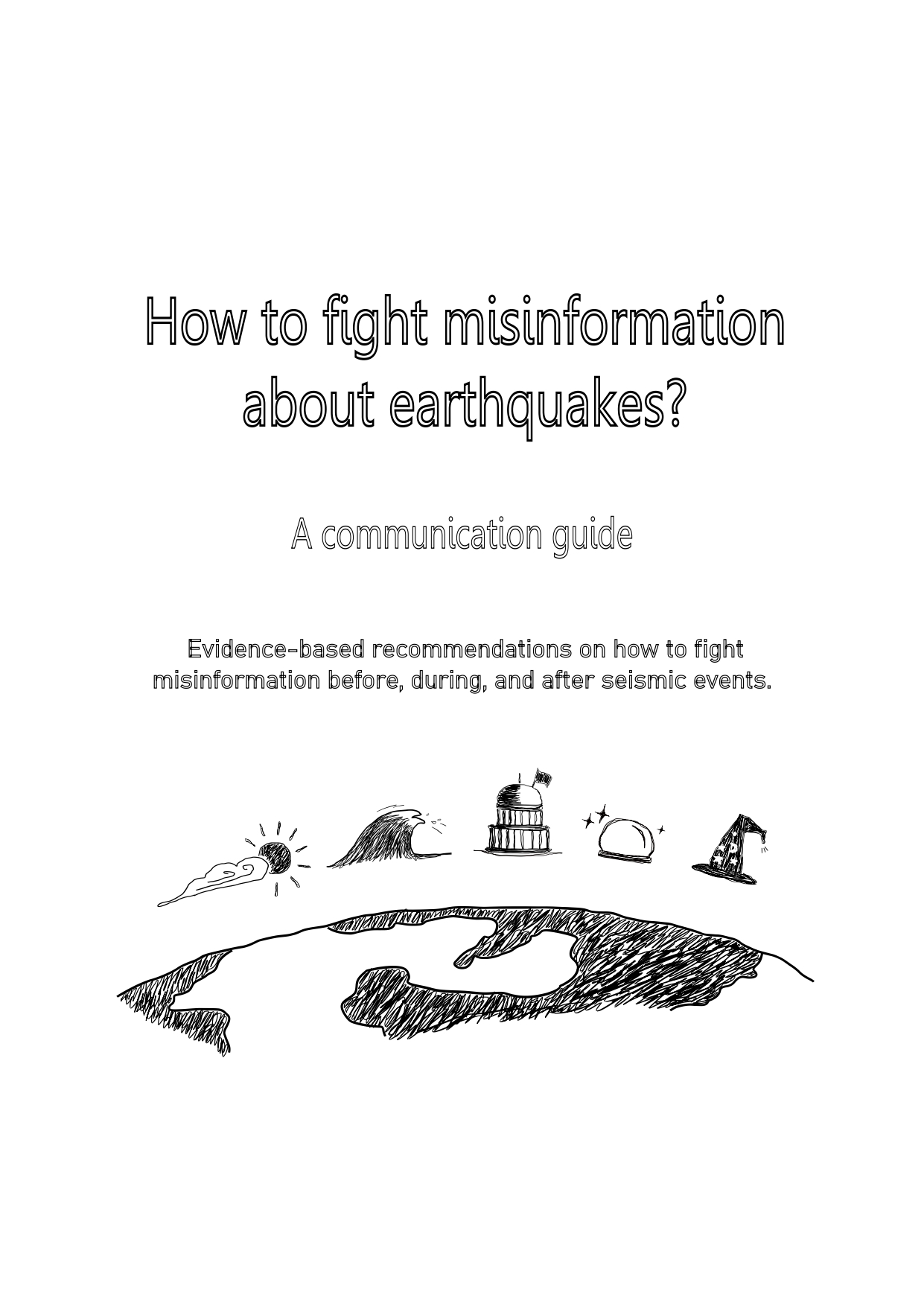 In 2020, the European-Mediterranean Seismological Centre (EMSC) launched a large discussion with partner institutes about a phenomenon observed by all: the resurgence of confusion between Earthquake Early Warning, Aftershock Forecast, and Predictions, which frequently led to the circulation of misinformation about earthquakes.

The confusion between these terms or these informational products is not insignificant, and if the scientists clearly distinguish the differences, this is not the case for the citizens… and it is precisely this confusion that fuels controversies or even conspiracy theories. A long research work followed to understand the appearance and the diffusion of earthquake misinformation, but also and above all how to fight it. This work led to the publication by ETH Zürich and the EMSC, of a Communication Guide for the use of all scientists and practitioners who are communicating earthquake information to the public.

Rumors, misinformation and false information have always existed and proliferate before, during and after disasters and emergencies. This holds true also for earthquakes. For instance, after the Haiti earthquake in 2010, researchers noticed on social media the spread of rumors linked to the crisis response and to the causes of the earthquake and its numerous. In Albania in 2019, fake news about a possible magnitude 6.0 aftershock led people to flee the capital city in panic. Another example includes rumors of secret petrol drills that would have generated an earthquake swarm in Mayotte in 2018. We can also think, finally, of the infamous and complex example of L'Aquila, which illustrates all the consequences (sometimes legal) that misunderstood or inappropriate information can have. 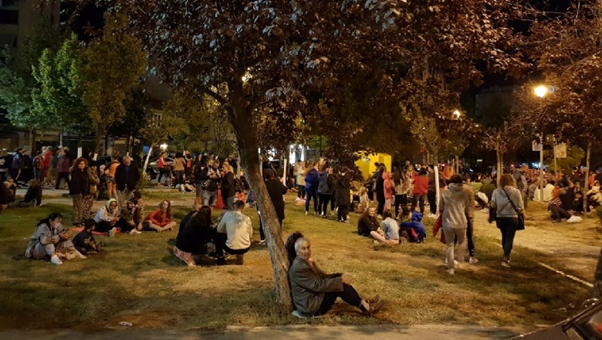 In reality, there are few examples of impacting earthquakes that did not give rise to misinformation…and for good reason! Fake news and misinformation especially propagate when authoritative information is lacking and ambiguous information is shared, and when anxiety and need for information and sensemaking are high… which is often the case when it comes to earthquakes.
The problem with this type of misinformation is that it has dramatic consequences in the short and medium term. Some are tangible, for example when they induce potentially dangerous behavior after an earthquake. Others, on the contrary, are intangible, but just as pernicious, like the loss of confidence in authorities, in science in general or in a shared vision of the world around us.

What to do then? It is in fact the social responsibility of scientists and authorities to act upstream to prevent their appearance (prebunking), but also after their dissemination in order to deny them and limit their scope (debunking). Ethics require us to act.

Communicating better to prebunk and debunk misinformation, yes… but how to do so?

There is no simple solution for combating misinformation, but communication is for sure part of it and this is a permanent task for seismic institutions and practitioners that are used to interact with the society, including professional users as well as the public.

Communicating as a tool to fight misinformation requires a good understanding of the needs and concerns of one’s audiences. Therefore, one of the key elements is to understand why people tend to believe in and share misinformation. Here, one of the first misconceptions to deconstruct is probably the fact that people who believe or share misinformation aren't stupid or ignorant. There is actually a full set of socio-technical, cultural, social and psychological factors that can explain their beliefs. As we said earlier, the lack of available information, the anxiety caused by the earthquake, the lack of science literacy and a strong need for sense-making can partly explain why people are vulnerable to misinformation. Also, earthquake misinformation sharing is often unintentional: it is because people sincerely believe that the information is (or could be) true that they share it with their friends and family.

With this in mind, it is then important to adapt the communication strategy to the audiences and their needs, but also to the specific type of earthquake misinformation that is targeted. And it is with the aim of assisting scientists and communicators in this work that we have created a Communication Guide.

A communication guide for scientists and practitioners

Supported by two Horizon-2020 projects (RISE and TURNKey), "How to fight misinformation about earthquakes?” is a communication guide targeted at institutions, scientists and practitioners communicating earthquake information to the public. It is available in open access and free to download: https://www.research-collection.ethz.ch/handle/20.500.11850/530319. Further, we wrote a Good Practice Report for the RISE project, stressing the scientific contribution with our work.

The first part of the guide focuses on addressing the issue of misinformation regarding earthquakes. It draws the contours of the issues and will convince you that it is important to fight it, in particular through an appropriate communication strategy. But the added value of the guide lies above all in its practical advice to fight misinformation. In particular, you will find information on the best way to time your communication throughout the disaster cycle. Last but not least, for each of the three earthquake myths you will find a Practical Sheet with (1) the most frequent questions or beliefs, (2) the state of scientific knowledge on the subject, (3) the specific reasons behind these myths, (4) specific recommendations in terms of communication to combat this misinformation. 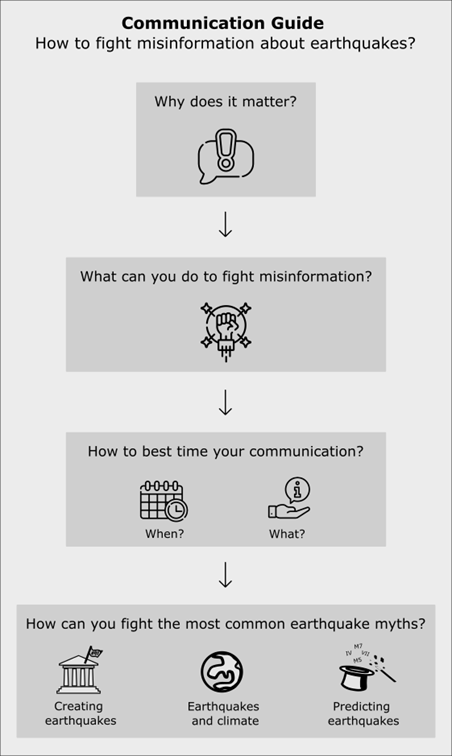 A first step for CORE’s objectives

In addition, within the general framework of the study of misinformation in the event of a disaster, CORE will also incorporate a special focus on earthquakes thanks to the integration of some of these recommendations in the EMSC twitter bot, @LAstQuake. A decision-making study will be carried out in parallel to find out if the prebunking and debunking messages of this bot are effective. Further, the group at ETH Zurich will analyze the role of authoritative voices on social media to avoid the spread of misinformation in the context of multiple hazards. Thereby, people’s behavioral biases and risk perceptions will be explored too.

And if you want to know more…

Join us for a Lunch Talk on Tuesday the 12th of April (12.00-12.35pm CEST) to have an overview on the communication guide and to discuss with us the strategies to fight misinformation about earthquakes. Registration here.

The authors would like to thank all seismologists, statisticians, geo-physicians, natural scientists, social scientists and practitioners who were involved throughout the development of this communication guide. We especially thank Dr. Sara McBride, Dr. Femke Mulder, Dr. Sarah Dryhurst, Giulia Luoni, Dr. Julia Becker and Max Schneider for their valuable feedback and Prof. Dr. Stefan Wiemer and Dr. Rémy Bossu for their scientific inputs.